Board changes and 2020 guidance

Tullow Oil plc (Tullow) today provides a forward-looking production and financial update and announces a number of changes to the Board that take effect immediately.
Back to Press releases

Tullow Oil plc (Tullow) today provides a forward-looking production and financial update and announces a number of changes to the Board that take effect immediately. 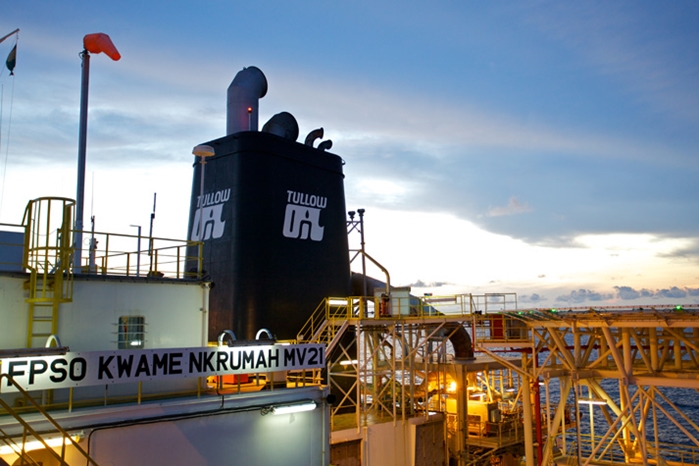 A conference call will be hosted by Dorothy Thompson, Les Wood and Mark MacFarlane at 8:00am this morning. Details of the call can be found at the end of this release.

Paul McDade, Chief Executive Officer, and Angus McCoss, Exploration Director, have resigned from the Board of Tullow by mutual agreement and with immediate effect. Dorothy Thompson has been appointed Executive Chair on a temporary basis and Mark MacFarlane, Executive Vice-President, East Africa and Non-Operated, has been appointed as Chief Operating Officer in a non-Board role. Les Wood continues as an Executive Director and Chief Financial Officer. The Board has initiated a process to find a new Group Chief Executive.

As disclosed in Tullow’s Trading Update on 13 November 2019, the Group expects 2019 full year net production to average c.87,000 bopd. The Group also expects to deliver free cash flow of c.$350 million, has liquidity headroom in excess of $1 billion and no near-term debt maturities. Whilst financial performance has been solid, production performance has been significantly below expectations from the Group’s main producing assets, the TEN and Jubilee fields in Ghana.

A number of factors have been identified that have caused this reduction in production guidance. On the Jubilee field, these factors include significantly reduced offtake of gas by the Ghana National Gas Company which Tullow makes available at no cost, increased water cut on some wells, and lower facility uptime. At Enyenra (one of the TEN fields) mechanical issues on two new wells have limited the well stock available and there is faster than anticipated decline on this field. The non-operated portfolio is performing well, and production is expected to be sustained for the medium term.

Independent reserves audits carried out during the year indicate that oil reserves are likely to remain broadly flat at year-end 2019 compared to the previous year-end (excluding the impact of 2019 production). The audits show increased oil reserves for Jubilee, Ntomme (one of the TEN fields) and the non-operated fields which are largely offset by a c.30% decrease in Enyenra reserves.

In light of these new production forecasts, there will be a thorough reassessment of the Group's cost base and future investment plans in order to allocate appropriate capital to the Group’s core production assets, development projects and continued exploration.
The Board believes that a series of actions will help deliver sustainable free cash flow. These actions include reducing capital expenditure, operating costs and corporate overheads. In 2020, the Board expects the Group to generate underlying free cash flow of at least $150 million at $60/bbl after a Group capital investment of c.$350 million. Considering this level of expected free cash flow, the Board has decided to suspend the dividend.

Dorothy Thompson, Executive Chair, commented today:
"I would like to thank Paul and Angus for all their hard work and dedication to Tullow over many years. They leave behind a business that has delivered two major offshore developments in Ghana, made significant oil discoveries in Kenya and Uganda and has a high-impact exploration portfolio. These remain the key building blocks of our business today.

“The Board has, however, been disappointed by the performance of Tullow’s business and now needs time to complete its thorough review of operations. A full financial and operational update will be provided at Tullow’s Full Year Results on 12 February 2020, with an update on progress to be given in the Group’s Trading Statement on 15 January 2020.

“Despite today’s announcement, the Board strongly believes that Tullow has good assets and excellent people capable of delivering value for shareholders. We are taking decisive action to restore performance, reduce our cost base and deliver sustainable free cash flow.”

The drilling of the Carapa-1 well on the Kanuku Block in Guyana continues, with a result expected before the year-end. Carapa-1, operated by Repsol, is the first well to test the deeper Cretaceous play in Tullow’s Guyana acreage.

Set out below is a summary of the terms relating to Mr McDade’s and Mr McCoss’ departure from Tullow.  These terms are in line with Tullow’s shareholder-approved 2017 Remuneration Policy. Save as set out below, Mr McDade and Mr McCoss will not receive any compensation or payment for the termination of their employment agreements or for their ceasing to be directors.

• In connection with the termination of their employment, Mr McDade and Mr McCoss will receive a payment for salary and pension contributions in lieu of their contractual notice period; continued private healthcare insurance coverage for up to 12 months; and capped contributions towards both their legal fees and the provision of outplacement services.
• Neither Mr McDade nor Mr McCoss will receive any cash or share-based awards under the Tullow Incentive Plan (the TIP) in respect of the financial years ending 31 December 2019 or 31 December 2020.
• In respect of the TIP, the Remuneration Committee has determined (in accordance with the good leaver provisions of the TIP) that Mr McDade’s and Mr McCoss’ unvested awards may continue to vest on their scheduled vesting dates, subject to the terms of the TIP.  In respect of the Tullow Share Incentive Plan (the SIP), the shares which Mr McDade and Mr McCoss hold already pursuant to the SIP will be released on termination of employment.

Further details of the remuneration payments to be made to Mr McDade and Mr McCoss, in accordance with s430(2B) Companies Act 2006, can be found on Tullow’s website (www.tullowoil.com).

This announcement includes inside information as defined in Article 7 of the Market Abuse Regulation No. 596/2014 and is being released on behalf of Tullow by Adam Holland, Company Secretary.